Anyone who has made red wine will know what a pair of purple stained hands looks like and that was the inspiration for the brandname. 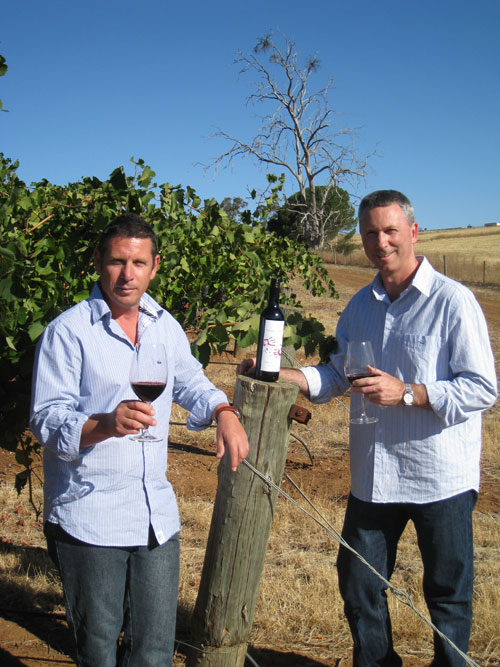 The Purple Hands home vineyard, Stansborough, is situated in the Southern Barossa just north west of Williamstown. Literally, a stones throw from the Whispering Wall reservoir.

The 32 acre vineyard is planted on perfect Shiraz dirt, friable red clay over limestone. The vineyard plantings include Shiraz, Montepulciano and Aglianico.

The Zerk Grenache Vineyard was planted by the Zerk family in 1961 and located 1 Km east of the township of Lyndoch. The Grenache site is around 280 m above sea level with a northerly aspect. Soil consists of deep red clay with bands of ironstone. The vineyard is own rooted, clone is unknown. The vines are goblet hand pruned to 32 buds. The mid rows are cultivated to natural sward. No irrigation is used.

The third source of fruit is the ‘Woodlands’ vineyard also located just outside of Lyndoch. Circa 1880 PF Zimmermann planted 468 Cabernet Sauvignon vines on his family property Woodlands. This vineyard is believed to be one of the oldest bearing plantings of this variety in Australia and possibly the world. To respect this pioneering vigneron and the vines he planted, Purple Hands have applied minimal winemaking input endeavouring to craft a wine that reflects the history and site.

The Purple Hands mission is to produce fruit driven wines with elegance and texture that reflect the vineyards from which they are sourced.

The aim is to make balanced wines so they can be consumed as young wines, but will also become interesting and enjoyable older wines.

In 2013, Purple Hands Wines first entered the James Halliday Wine Companion and was awarded a 5 star rating and included in the Top 10 New 5 Star Wineries.2015 saw Purple Hands Wines transition into a red 5 star winery. This is awarded to wineries regularly producing wines of exemplary quality and have at least two wines rated at 95 points or above, plus have had a five-star rating for the previous two years.This 5 Star rating places Purple Hands Wine in the top 10% of wineries listed on Wine Companion.James Halliday published a review of Purple Hands in 2011 and stated:“Both the Shiraz and Grenache have a common theme of elegance, and a voice distinctly different to that of mainstream Barossa.”– James Halliday Weekend Australian Magazine Oct 2011In 2019, their 5 star rating continues and James wrote:

“This is a partnership between Craig Stansborough, who provides the winemaking know-how and an 14ha vineyard of shiraz (northwest of Williamstown in a cooler corner of the southern Barossa) and Mark Slade, who provides the passion. Don’t ask me how this works – I don’t know – but I do know they are producing outstanding single vineyard wines (the grenache is contract-grown) of quite remarkable elegance".

In 2014, Craig Stansborough was awarded the 2014 Barossa winemaker of the year by the Barons of the Barossa.

Some of the oldest original Grenache vines are in the Barossa Valley. The fruit for...

The fruit for this wine is sourced from a single vineyard, the Stansborough Vineyard, Williamstown...

Aglianico is a black grape traditionally grown in the southern regions of Italy. Along with Sangiovese...